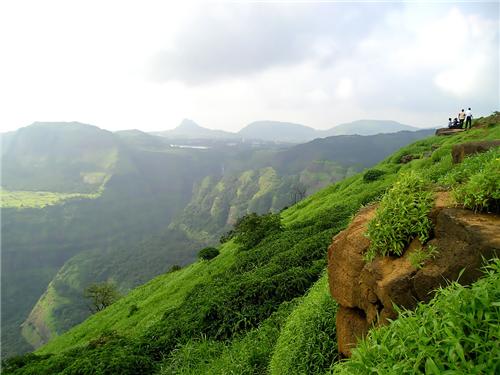 Lonavala is also a major stop on the rail line connecting Mumbai and Pune. From Mumbai suburbs, local trains are available from Karjat. It is also an important town on the Mumbai-Pune road link. Both the Mumbai-Pune Expressway as well as the Mumbai-Chennai highway pass through Lonavla. As of 2001 India census, Lonavala had a population of around 50K. Males constitute 54% of the population and females 46%. Lonavala has an average literacy rate of 75%, higher than the national average of 59.5%: male literacy is 81%, and female literacy is 69%. In Lonavla, 11% of the population is under 6 years of age.

Lonavala is a famous hill station located in the Sahayadri range in Maharashtra. Located 64 kilometers from Pune and 96 kilometers from Mumbai, Lonavala sees tourists all round the year. With it's natural beauty like green valleys, beautiful waterfalls and the pleasant cool climate, Lonavala is rightly called as the "Jewel of Sahaydri". The average altitude of the region is about 622 meters (2041 feet) above sea level and the entire area spreads across 38 square kilometers. The rigid, rocky landscape of Lonavala  makes it an ideal place for adventure sports and tourism. 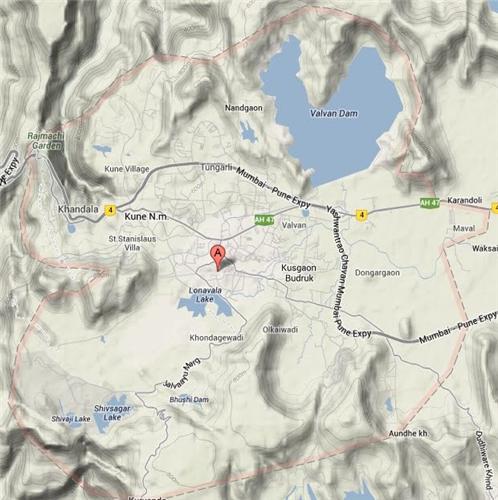 Lonavala, being a hill station is having a pleasant weather through out the year. Summers (April-June) are mild, while winters are cool (November-February). Apart from lush greenery, there is a large number of big and small waterfalls in the area, especially during the monsoon season from June to September.

Lonavala lake, Shivaji Lake, Shivsagar Lake, Tungarli Lake and Valvan Lake- artificial lake created by Valvan Dam are the lakes that are present in Lonavala, which adds feather to the beauty of Lonavala.
It was in the main a lush forest once it had been discovered. owing to its jungle atmosphere, there was a awfully little population and therefore the few that lived there are unremarkable, were away within the jungle. because it was a lonely and deep forest, it had been called “Lonali” within the maturity from that it received its name. there's a word found in Sanskritic language “Layan” whichsuggests place of rest creating Lonavala the right name to explain this serene space. As per the researchers, the name Lonavala is derived from the Prakit dialect, used by the locals tribes. "Len" in Prakrit means resting places made out of stone and "Avali" means a series of something. Thus, the word Lenavali which transformed into Lonavala.

Lonavala came under the Yadava Empire which were considered as one of the most aggressive Hindu clans in the Western region. After their battler against the Marathas, the Mughals ruled the region for a longer period. Later, a hue Maratha uprising saw Mughals limiting to the north central region as the Marathas regained the rule. During the early 1600, the Britishers came in, forming a trade path and later the under the Queen's emblems fought for it's supremacy. The Khandala Ghat was conquered in 1778 and thus began the earliest British settlement in the region.

The British began their rule officially from 1818 onward. Several small uprisings kept happening, where Maratha kings combined their forces to fight the company. Lonavala's emerged as a summer capital for the British. When the summer heat waves of punished the region, Britishers took to the hill station to get some relief. It gradually became a picnicking and hunting spot for the ranks in the company. 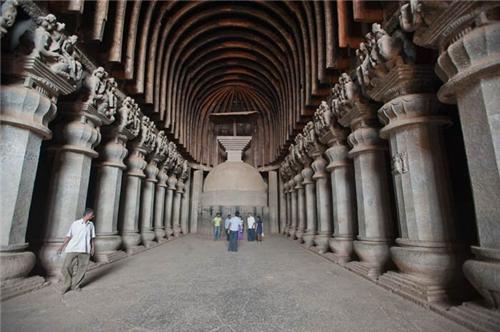 The entire region is known for heavy showers experienced during the months from June to September; advisably, October to May is the best time to visit the hill station. Cotton clothing is apt all through the year and light woolens may be required in winter months. Talking of temperature in Lonavala, the maximum temperature in summers touches 36 degree C and in winters the minimum temperature remains up to 12 degree C. In turns out to be a great romantic spot during monsoons.

Lonavala is a famous hill station located at an altitude of more than 600 meters (2,041 ft) above sea level, in the Sahyadri ranges which starts from the Deccan Plateau and runs along the Konkan coast. This gorgeous hill station, located in Sahyadri ranges, is known not just for its healthy climate and scenic views, but also many tourist attractions. Though a small place, Lonavla has many sightseeing places that can be explored on a tour to this hill-station. Touted as "City of Caves", there are several beautiful caves such as the Karla Caves, Bedas Caves and Bhaja Caves.

Some of the best tourist spots in Lonavala are Rajmachi fort, Shivaji Udyan, Valvan Dam, Ryewood Park, Lohagadh Fort, Lonavala Lake, Tungi Fort, Duke's nose, Tiger's Leap and many more. The entire region is known for it's terrains thus it's an ideal spot for adventure junkies.

Lonavla has become a popular place for people to buy second homes or vacation homes. Since Lonavla is close to Mumbai and Pune, and can give relaxation of mind from a daily stressful life, many developers have started building properties in Lonavala. It's been a weekend home for the people as it is a beautiful place to go on a weekend and relax away from the traffic of the city.

Culture and Festivals in Lonavala

Maharashtra is the centre of many religious and cultural traditions. In Maharashtrian villages, life revolves around fairs and festivals. For a transcendental vision of Reality, Kaivalyadhama Yoga Institute was founded by Swami Kuvalayananda on the Vijayadashami Day in 1924 at Lonavala in Pune District of Maharashtra. The institute aims at reorganizing the society on spiritual values, through the revival of ancient yogic discipline.

Almost all the festivals celebrated by different religions are enjoyed here also. People enjoy all the festivals without caste, creed and religion differences. During Ganesh Chaturthi and Vijayadashami, the whole town comes together to brighten the entire city with the fervor and energy. Beginning on the day of the installation of idols of Elephant headed Lord Ganesha, one of the most loved deities of the Hindus, it goes on till the immersion of the Lord's idols on the tenth day. Famous religious places to visit in Lonavala are: Ekvira Temple, Bhaja and Karla Caves (Rock-cut cave temples), Elephanta Caves (Lord Shiva Temple). 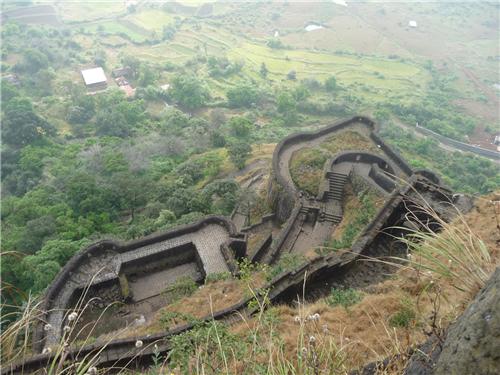 Lonavla is situated on the Mumbai - Pune Expressway and is well-connected to several towns in Maharashtra such as Karjat, Dabhade and Khopoli. Very comfortable, air-conditioned buses can be boarded from various locations in Mumbai.Also, boarding shared cabs is the most favored choice for people traveling to Lonavala from Mumbai. Most of the cab-boarding locales in places like Vashi and Dadar, in Mumbai, schedule rides to Lonavala throughout the day.

Lonavala is a great spot for tourism in Maharashtra and each year thousands of people visit this amazingly beautiful hill station for some fun and relaxation. Shopping and tourism co-relates each other and Lonavala cannot be left out when it comes to some great shopping experience. Lonavala is famous mostly for edible items like chikkis (a mix of jaggery and nuts), fruit jams, jellies, wafers, candies and more. This munchies are prepared in small factories in Lonvala and available for both wholesale distribution and open for tourists. One should definitely experience these tongue tickling delights in Lonavala. 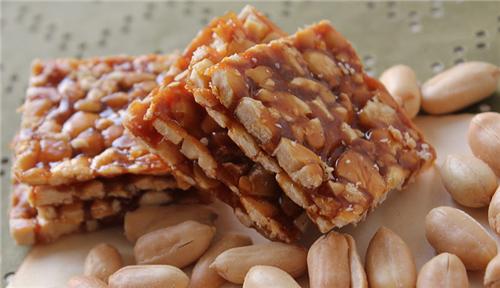 To buy the hard sweet candy-chikki, one can easily find the large number of Maganlal Stores around you because Maganlal's has come to be known over the years for its freshly prepared and extremely delicious chikki. Along with Maganlal's National Chikki are also the famous store located in Lonavala Bazaar. National Chikki is not only famous for chikki but also for its wide selection of freshly prepared fudge.

Lonavala's market are full of things of exquisite, Kolhapuri Slippers (Chappals) are one of them. One can find varieties of Kolhapuri chappals in Lonavala in all major colours. Other major shoe brands like, Bata, Adidas, Nike, Liberty and more, are all available here. One of the oldest and unique footwear shop Chetna Footwear provides foot-wears in different variety and style for all ages. Apart from that, Fine Foot-wear is also renowned for variety, style and excellence in the footwear world.

Lonavala- A Perfect Blend to Relax

Lonavala is a perfect place to relax oneself from the hectic modern life. The scenic beauty of the lush green valleys in the lap of nature patronize oneself. Apart from scenic beauty Lonavala is a great place from the consent of history, as it's been a home for Shivaji. One may get a lifelong mesmerizing experience while visiting Lonavala.