Bhushi Dam is located a few kilometer from Lonavala and is a very popular weekend hangout for Pune’ites and Mumbaikars.

In a rainy season, when the Bhushi dam overflows, the water flows over a series of steps. The water also flows over easily accessible rocky terrain. The reason, why the Bhushi Dam gets extremely crowded on a weekend is that the terrain and the water make a mesmerizing fun combination. In the weekends, mostly of a rainy season, it gets so crowded, that a first time visitor would be left searching for the “steps” which everyone talks about, only to realize that every inch of the steps have been occupied. Also, the waterfalls on the mountain range, makes the atmosphere more lively.

To reach the dam, one has to wade through knee-deep water (depending on the water level). There are lot of shops selling rubber slippers which are more suited to the water/rocks rather than your expensive Nike shoes and Bata chappals.

Moreover, the lake created by Bhushi Dam is also used for power generation. This lake belongs to Tata Power. In monsoon, when this lake gets full, the water is used to generate power (electricity) through their(TATA's) Khopoli Power House.

Bhushi dam has become so commercialized that there are a few dozen shops in the small area next to the dam selling anything from corn and pakodas to chai. You can relax on the steps and order them and they will be delivered to you right at your step.

Apart from food, every open space close to Bhushi dam will have a board “Bhushi dam parking” and there will be guys literally peeping inside your car and turning your steering wheel towards their parking. The best place to park would be beyond the dam (on coming from Lonavala) on the sides of the road. Parking on the road also helps you to get out of the place faster. There are no single/double yellow lines to bother you here. 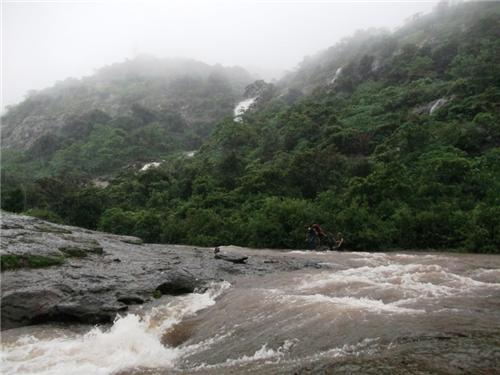 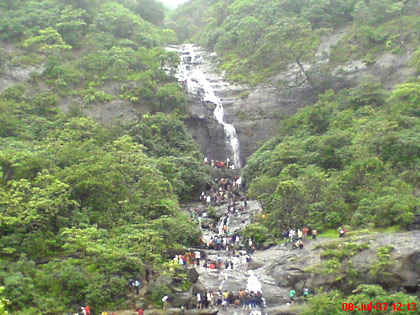 Other than the adventurous atmosphere of Bhushi Dam, one has to be careful while frolicking in water, as more than 5 persons drown nearby waterfalls in monsoon every year on average.

Excluding all other factors, this is a good place to visit if you love getting wet from head-to-toe and this is the point after coming where one feels like being in Lonavala that one has heard of.

During Monsoon (June to September)