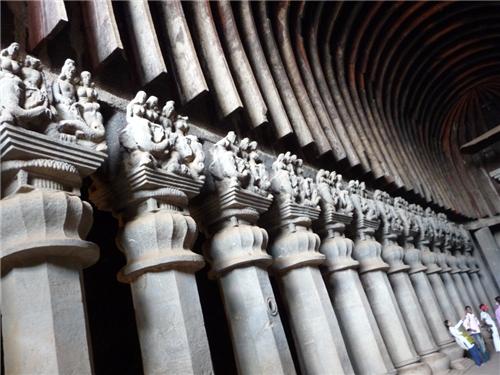 India-being an origin country for Buddhism, hosts immense wealth of ancient rock-cut architecture for Buddh. But, many spectators agree that the most impressive Buddhist Prayer Hall (Chaitya) is located in Karla Caves at Lonavala. This caves lie in the western ghats, about 114 km. away from Mumbai. The Karla caves carry an exquisite same as that of the famous Ajanta and Ellora caves but are less crowded and highly pleasant, making it good for picnics and day outs. Today, the cave complex is a protected monument under the Archaeological Survey of India.

These amazing caves were started by ancient Buddhists. With Carbon-14 dating process, archeologists found that the architecture and carving or inscription went back to 120 B.C. In the ancient time, Buddhists are said to be successful traders and manufacturers. So, at the time of Satavahana dynasty, along their trade route of Arabian Sea to Deccan, temples appeared. After that, these caves are also called as 'Temples of Traders'.

It is believed that in 2nd century BC – mid 2nd century AD there were more than thousands of caves carved out of the Shayadri range particularly for the Buddhist monks to stay.

Architecture of the Karla Caves

Karla Caves is one of the greatest representation of the Indian cave architecture built out of the sheer piece of stone. The caves are cut out of mountains and are one of the oldest examples of cave decoration by humans.

As per the historians, these Buddhist caves were divided in chaityas (sancutaries) and viharas (monasteries). Chaityas wer mainly used for worship and meditation purposes and had more exquisite architecture. Viharas were the living area of the monks, where the central hall was cut into walls to make rooms.

The entire caves are built with hard efforts, alone on the rocky hillside. It was constructed from top to bottom, first the slopes were cleared of any vegetation and then tunnels were dug to construct the core. Wet wooden planks were kept between the rocks, when the woods expanded, they broke the stones, making way for easier carving.

This rock was carefully removed and the exposed walls of cave chamber leveled and polished. After the main body of rock was removed, more exquisite sculpting was done. Construction workers moved here not only themselves but many tons of stones – doing it carefully, without damaging the exquisite carvings and leveled surfaces. The initial stages of the caves were built by the early settlement of the Buddhist monks. At that time, Buddhist monks didn't use idols in the temple. Afterwards, the Mahayana Temples from the 5th -10th century starting placing the statues in their temples.

The arched gates and secure interiors were the main features of these caves. the front portion of the caves have minute detailed carvings and there are carved temple screens and with sculpted human figures at the corners. There are screens from the inner chamber to the main cave.

The architectural and artistic achievements made in Karla Caves have left profound impact on development of Indian art.

Caves contain enormous chaitya – the largest and possibly the most beautiful among the more than 1,000 cave temples in India, carved thousands of year ago. This 45 m long and up to 14 m high chaitya has beautiful facade with numerous sculptures in both sides of the central doorway and rich, intricate artwork and structural elements inside, often imitating woodwork. The stone carvings on the wall depict the local culture and daily lives of the people from the era. Rows of pillars divide the chaitya in three parts - central hall and narrow side aisles, divided by two rows of ornate pillars – 15 pillars in each row. Pillars have beautiful capitals, which, among others, include also a representation of man and women riding elephants and bowing to Buddha. Representations of Buddha have been added circa 7th century AD. The ceiling of Karla Cave No. 12 has wooden ribs, which is not found usually in cave temples.

Though this woodwork has been cut 2000 years ago, it has been preserved well without corrosion. Far end of chaitya contains the shrine with an umbrella over it.

At the entrance of enormous Chaitya, there were couple of pillars with exquisite carving of lions. But, today, the site of one pillar is taken by a temple of Hindu Goddess Ekveera. This temple has been visited by thousands of pilgrims every year. This temple is seen as impingement of Hindu religion on Buddhist Shrine.

Places to Visit around Karla Caves

Valvan dam is a great place for spending the calm evenings with your loved ones and friends in the beautiful gardens surrounding the area and an amazing panoramic view to enjoy. Another beautiful spot is Tungarli Lake, 3 kms. away from the station.A few kilometers away are two ruined forts. Lohagad - the Iron Fort and Visapur. Both forts are 18th century structures with splendid views. The Tiger's Leap, Lonavala Lake, Barometer Hill, Bushi Dam are some of the beautiful places to visit near by.

Being at the top of hill, Karla enjoys a pleasant climate all round the year. So, one can visit Karla Caves at a leisure time. Along with that, temples carved in natural cliff were especially well suited for Indian conditions and prescriptions of Buddhists – they were cool in summer, pleasant in winter and spiritually were part of nature.

By Road
Karla is 114 km. from Mumbai and 56 km from Pune on Mumbai - Pune road. State Transport buses ply from Mumbai, Pune to Lonavala and Lonavala to Karla.

By Rail
Nearest railhead is Malavi, 2 km. on Central Railway but the more convenient rail-head is Lonavala, 10 km.